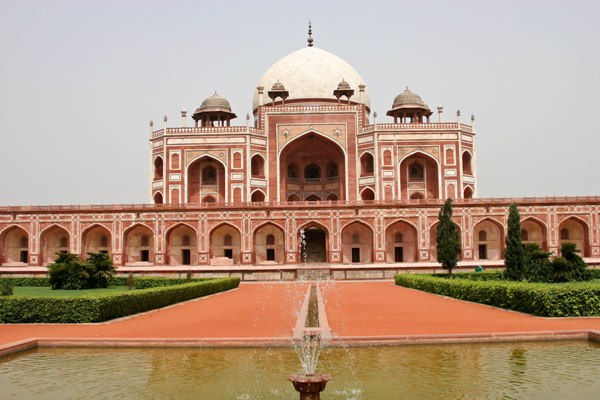 Day 01 Arrive Delhi
Our executive will receive you at the Delhi airport and escort you to the hotel for hassle free check in Delhi is the heart of the country. Old Delhi boasts Mughal charm which shows history & cultures of Muslim India. Old Delhi was the capital of Muslim India between 17th & 19th centuries. New Delhi was built as the Imperial capital of India during British Raj. Overnight stay 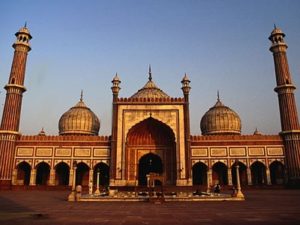 Jama Mosque Delhi Day 02 Delhi Sightseeing
Your tour of Delhi will take you through the old and new face of the capital of India. Old Delhi-Old Delhi is the 300-year-old walled city built by the Mughal emperor Shah Jehan in 1648 as his capital. Drive past the Red Fort from where the Prime Minister of India addresses the nation on India’s Independence Day. Visit Jama Masjid, the most elegant mosque in India that stands high on a hillock. On our way back, we visit Raj Ghat, Mahatama Gandhi’s shrine. New Delhi- New Delhi is the early 20th century British capital designed by Sir Edward Lutyens and Herbert Baker. Drive past the President’s House, the Rashtrapati Bhavan and India Gate, the great memorial arch built to commemorate the slain heroes of World War-I and Indo-Afghan War. Visit the precursor to the Taj Mahal, Humayun’s Tomb built in 1565 AD by the widow of the second Mughal emperor Haji Begum. Later drive to Delhi’s most recognized symbol, the 12th century Qutub Minar, standing 72 metres high and Delhi’s first mosque Quwat-ul-Islam (Light of Islam) Mosque. We end the day by visiting the Hindu heritage of the city, Lakshmi Narayan temple built by one of India’s premier industrial families, the Birlas. Overnight stay

Day 04 Agra-Sightseeing
Taj at Sunrise Sunrise is undoubtedly the best time to avoid the crowds and the heat. As the sun rises and the early morning mists clear, the delicately carved white marble walls of the Taj are slowly unveiled to dazzling effect. This makes visiting Taj at sunrise particularly special. After visit return to hotel for breakfast Later visit Agra Fort- The red sandstone fort as seen today was constructed by Emperor Akbar in 1573 and additions to the building continued till the time of his grandson Shahjahan. Agra Fort won the Aga Khan Award for Architecture in 2004 and is a UNESCO World Heritage Site . Overnight stay 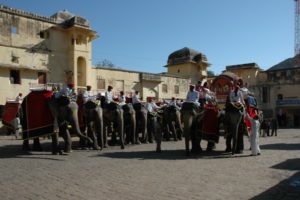 Elephant at Amer Fort Day 06 Jaipur- Sightseeing
Jaipur is vibrant capital of Rajasthan state, which is also known as ‘pink city” for the colour of the building in its wonderful old city. its foundation in the 17th century by Sawai Jai Singh, from whom it derives its name.Morning: Visit Amber Fort , a classic Rajasthani Fort Palace. The fort may look rough and austere from the outside, but the interiors in true Rajasthani style palaces evoke a sense of refined luxury. City tour begins with a visit to the Maharaja's City Palace, a sprawling complex that served as home to the Jaipur rulers since the early 18th century. The complex is now a part museum with sections exhibiting some of the family memorabilia and art collection of the royal Jaipur family. Later visit an astronomical observatory Jantar Mantar, which is the largest stone and marble crafted observatory in the world. Stop at the Hawa Mahal or the Palace of Winds for photography. Overnight stay

Day 07 Jaipur-Delhi (05 Hrs. drive)
Morning at leisure to enjoy to the hotel facilities like Swimming pool, Spa etc / Explore city on your own / Shopping in the colourful Bazaars of Jaipur. Later in time leave Jaipur for Delhi international airport to connect flight to onward destination.

The Golden Triangle (Delhi-Agra-Jaipur-Delhi) is all time classic journeys of the tourists. Many tourists opt to start the journey from the capital as it is the accessible point to any other place. You will see different cultures while you do the tour of New & Old Delhi. The specific places for the tourists to visit are Chandni Chowk, Jama Masjid, Qutub Minar, India Gate, President’s House, Humayun’s Tomb, Red Fort, etc. The very next destination Agra- city of one of the seven wonders- Taj Mahal; gaze at the shimmering beauty at the time of sunset is really an unforgettable moment. The huge Agra Fort and astonishing Fatehpur Sikri are also the main itineraries of the city. The next favorable destination is the city enriched with the scenic beauty and great prehistoric things-Jaipur. The whole city is painted in the color pink and also renowned as Pink City. The place is flavored with the never ending charm and enriched with stunning forts and astounding palaces. Tourists can experience the flavor of Rajputs and the Royal families. With lots of Rajputana history, the city is amazed with beautiful architectures like Hawa Mahal, City Palace and Amber Fort.

Accommodation for 06 nights with breakfast; all transfers to / from airport and hotel by private air-conditioned car and driver for the duration of the journey ; English speaking local tour guides as per the itinerary, all entrance fees to attractions and monuments; assistance 24 hours.

Note:Price quoted above is an approximate price per person in a double room for period of October 2015 to April 2016. Travel insurance is not included in the cost. 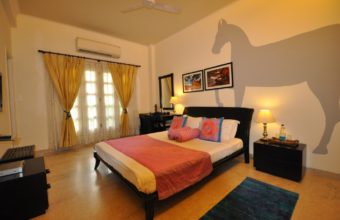 The Colonel Retreat is South Delhi’s best kept secret. It is a place offering every comfort and amenity that a traveler needs wrapped in utmost elegance. The hotel is a great favourite accommodation for business travelers and overseas tourists since it has a truly comfortable and graceful ambiance. Created by global travelers themselves, the Colonel Retreat pays great attention to ensure that the location, facilities and services are brilliantly matched and the guests receive the highest world class standards of hospitality during their stay. Its well furnished double rooms with a separate work table, air conditioned rooms with all necessities including free wi fi open into an open floor lounge. 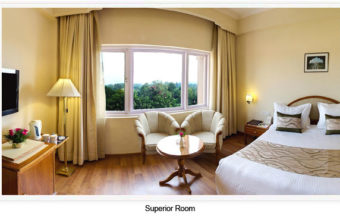 Situated 2kms away from the Taj Mahal, Clarks Shiraz is a 5 star luxury hotel spread over 8 acres of landscaped gardens and offers a serene ambiance even after being in the heart of Agra. The Clarks Shiraz is known for its exceptional hospitality overlooking the Taj Mahal and Agra Fort. The hotel offers an array of scrumptious cuisines ranging from Mughlai, Continental and Chinese to exotic beverages. The hotel caters to its guests with utmost efficiency and serves with the best to leisure travelers. 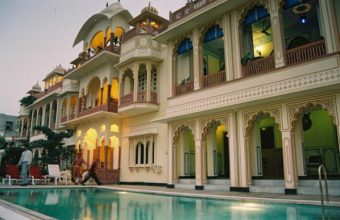 Shahpura House is a majestic inheritance owned by Maharaj Surendra Singh ji, who is a descendant of the royal Shahpura family. Renowned for its amazing hospitality, the Shahpura House pays attention to fine details in order to create unforgettable experiences for its guests. The hotel is beautifully decorated and offers fine dining restaurants and legendary bars in a royal ambiance. The Shahpura House allows you to dine both Indian as well as international cuisines in culinary masterpieces and a superb setting. 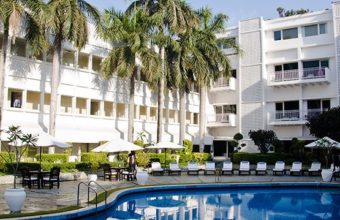 Wonderfully located right at the heart of New Delhi’s prominent address, the Claridges is a name in itself. Built is 1952, the Claridges offers a perfect blend of the elegance of old times and the luxuries of modern day advancements. This historical landmark is just a few steps away from the lively commercial and cultural centers of the capital city. This place is known for its delicate rooms and suites, a range of selective dining options, dedicated leisure and business facilities, classy architecture and expansive lush lawns. With a well-maintained swimming pool, sun decks, loungers and a bar, the Claridges is an ideal Hotel for the judicious traveler. 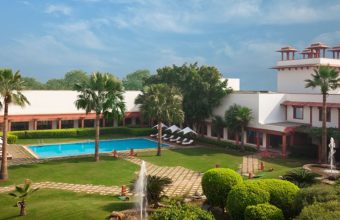 Trident has been built in close proximity to the Taj Mahal, which makes it a perfect site for experiencing the city’s Mughal history. This charming hotel built in local red stone from the Mughal era brings to its guests over 135 rooms and suites along with vast fascinating gardens, cascading water fountains, rejuvenating recreational and wellness facilities and great hospitality. Hotel Trident has its very own Trident Kids' Club to lure kids. The in house restaurant offers a range of cuisines from the kitchens of the Mughal emperors and other continental and Asian dishes while the Al fresco is for pleasing Italian flavor lovers.

Samode Haveli is a self contained, intimate, heritage hotel which welcomes you to the legacy of a magnificent, elegant and luxurious aroma renowned for their refined hospitality. This historical ideal is found hidden amidst the busy streets of old Jaipur. Samode Haveli is an exemplary Indo-Saracenic regal residence which is highly enriched with history and tradition and yet it offers you with contemporary luxuries of today’s world. Its flawless hospitality and courtesy mark to be the signature style of the Samode group of hotels who own the Samode Haveli. The hotel offers amazing traditional Rajasthani cuisines as well as many international flavours within its frescoed interiors. 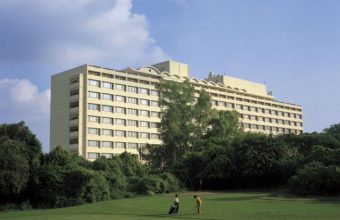 Being the capital’s very first luxury hotel, The Oberoi is an iconic landmark of New Delhi. Its matchless location allows you to have comprehensive views of the prominent Delhi Golf Course on one side and the historical Humayun's Tomb on the other. Spread across an area of 3600 square feet, the hotel possesses master bedrooms, open plan bathrooms, relaxation and fitness areas, a formal reception area, office space for private meetings and much more. The rooms are such that the guests will be mesmerized by the site of a cobalt water body and luxuriant palm trees clearly visible through the windows. 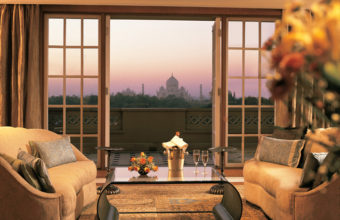 The Amarvilas embodies the ancient Mughal splendor and offers amazing views of the personification of love, Taj Mahal since it is just at a distance of 600 metres from the monument. The Amarvilas has a Mughal style quadrant, which is adorned with tumbling fountains and is framed by an arched passage way and gold leaf frescoes. The hotel presents special golf buggies to escort its guests to the Taj Mahal privately. The Amarvilas has been enriched with a well furnished living room, private terrace, a lavish dining room, a study and spacious bedroom. The Kohinoor Suite of the Amravilas offers spectacular views of the Taj Mahal and the guests can also enjoy a candle lit dinner beside its soft silhouette. 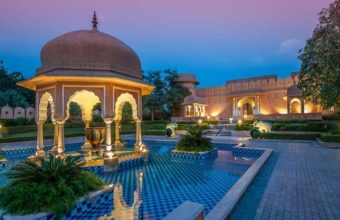 Built around a 18th century Shiva temple, the Oberoi Rajvilas resort spreads over an enchanting thirty two acres of beautifully landscaped gardens and exotic birdlife. The resort is a haven of mystical peace and natural serenity with the pink lime plaster walls of Jaipur replicated beautifully throughout its passage. The resort has been adorned with Mughal arches, gold leaf frescoes, high domed ceilings and splendid crystal chandeliers, which reflect the traditional Rajasthani charm and the renowned Oberoi luxury. Its Kohinoor Villa is a private enclosure with a swimming pool, a private dining pavilion, a five hole golf ground, two floodlit tennis courts and a croquet lawn. The spa offers unmatched Ayurvedic and Western beauty therapies for its guests. 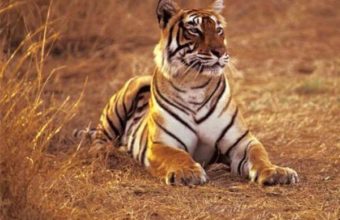