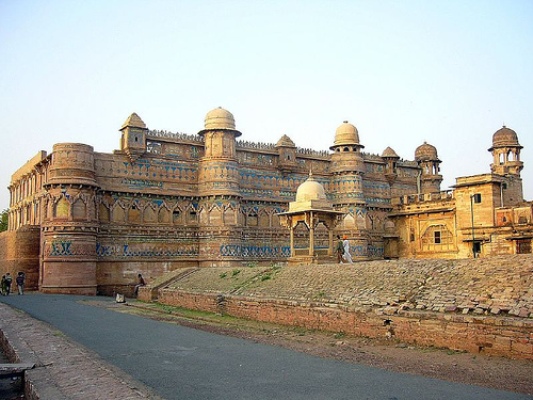 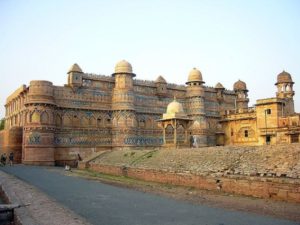 Gwalior Fort Day 01 Arrive Delhi
Our executive will receive you at the Delhi airport and escort you to the hotel for hassle free check in.Delhi is the heart of the country. Old Delhi boasts Mughal charm which shows history & cultures of Muslim India. Old Delhi was the capital of Muslim India between 17th & 19th centuries. New Delhi was built as the Imperial capital of India during British Raj.Overnight stay

India Gate Day 02 Delhi Sightseeing
Your tour of Delhi will take you through the old and new face of the capital of India. Old Delhi-Old Delhi is the 300-year-old walled city built by the Mughal emperor Shah Jehan in 1648 as his capital. Drive past the Red Fort from where the Prime Minister of India addresses the nation on India’s Independence Day. Visit Jama Masjid, the most elegant mosque in India that stands high on a hillock. On our way back, we visit Raj Ghat, Mahatama Gandhi’s shrine. New Delhi- New Delhi is the early 20th century British capital designed by Sir Edward Lutyens and Herbert Baker. Drive past the President’s House, the Rashtrapati Bhavan and India Gate, the great memorial arch built to commemorate the slain heroes of World War-I and Indo-Afghan War. Visit the precursor to the Taj Mahal, Humayun’s Tomb built in 1565 AD by the widow of the second Mughal emperor Haji Begum. Later drive to Delhi’s most recognized symbol, the 12th century Qutub Minar, standing 72 metres high and Delhi’s first mosque Quwat-ul-Islam (Light of Islam) Mosque. We end the day by visiting the Hindu heritage of the city, Lakshmi Narayan temple built by one of India’s premier industrial families, the Birlas. Overnight stay 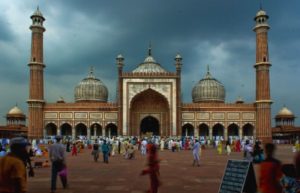 Jama Masjid Delhi Day 03 Delhi -Agra (Surface, 3 Hrs drive)
After breakfast leave Delhi for Agra for overnight stay. Agra on the right bank of the river Yamuna is known world’s most famous romantic architecture Taj Mahal. Later visit Agra Fort- The red sandstone fort as seen today was constructed by Emperor Akbar in 1573 and additions to the building continued till the time of his grandson Shahjahan. Agra Fort won the Aga Khan Award for Architecture in 2004 and is a UNESCO World Heritage Site . Evening visit Taj at Sunset affords the most impressive views of the Taj and as the sun goes down the white marble first takes on a rich golden sheen, which slowly gives way to rose-pink hues, then deep red and finally blue with the changing light. It is indeed a mesmerizing experience Overnight stay 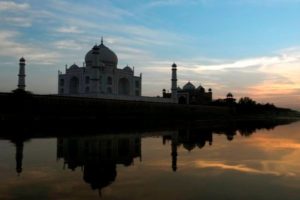 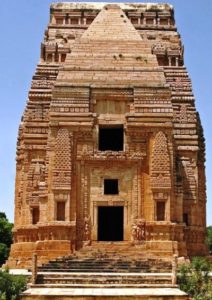 TeliMandir Day 05 Dholpur -Gwalior (01 ½ Hrs drive)
Today morning we leave for historic city Gwalior which is situated in central state of India Madhya Pradesh. This was capital of Scindia dynasty in 18th century. Gwalior is dominated by Gwalior Fort, a world heritage site. Our half day visit takes the magnificent 15th century Gwalior Fort dominates the city, stretching nearly 3km on top of a hill. Its stunning façade is decorated with beautiful tiles featuring animals, birds and plants. Within the 10 metre high walls of the fort are temples and palaces, which we visit, including the 9th century Teli-ka-Mandir and the quaintly named Saas-Bahu (or Mother and Daughter-in-Law) Temples.The 15th century Gurjari Mahal is now the Archeological Museum (closed on Mondays). A short visit to the 16th century tomb of Mohammed Ghaus and the mausoleum of the a famous Mughal singer, Tansen. We end with a visit to the Scindia Museum, housed in the impressive Jai Vilas Palace, built in the 19th century for the Scindia royal family. Overnight stay

Gwalior Fort Day 06 Gwalior- Datia -Orcha (02 Hrs drive)
Today we leave for Orcha and enroute visit rural town Datia where we visit temples. After visit continue drive to Orcha for an overnight stay Orcha is sleeping town on way to Khajuraho and near Jhansi.Here visit the Jehangir Mahal, built in the 17th century by Raja Bir Singh.The palaces and the temples built by its Bundela rulers in the 16th and 17th century retain much of their pristine perfection. Jehangir Mahal, a tiered palace, is crowned by graceful chhatries and commands a spectacular view of the soaring temple spires and cenotaphs around.Overnight stay

Orcha Temple Day 07 Orcha – Chanderi (03 Hrs drive)
Today we head out to Chanderi which was greatest power at the time of Mandu’s. Here you visit many ruined palaces. Now it is mainly known for it’s silk saris. Here we visit Chanderi Fort, mosques and Chanderi Weaving units The Chanderi is extremely fine but has a more intricately woven border (with motifs) than the Maheshwari. As with most handlooms and handicrafts of India, weaving these saris is mostly a family affair. Overnight stay

Day 08 Chanderi-Bhopal (05 Hrs drive)
Today morning leave for Bhopal which capital of central India state Madhya Pradesh enroute visit Udaygiri caves, Vidisha and UNESCO world heritage site Sanchi Stupas. Udaigiri caves :13 km from Sanchi and 4 km from Vidisha are a group of rock-cut cave sanctuaries carved into a sandstone hill that stands sentinel-like on the horizon. An inscription in one of these states that it was produced during the region of Chandragupta II (382-401 AD), thus dates these caves to 4th-5th century AD.
Vidisha : Vidisha, 10 km from Sanchi, occupies an important place amongst the ancient cities in India. The Emperor Ashoka was governor of Vidisha, and it finds mention in Kalidasa's immortal Meghdoot The site is mainly known for its ancient rock-cut temples excavated in an isolated stand stone hill and the numerous Buddhist remains in its neighbourhood.
Sanchi is known for its Stupas, monasteries, temples and pillars dating from the 3rd century B.C. to the 12th century A.D. The most famous of these monuments, the Sanchi Stupa 1, was originally built by the Mauryan Emperor Ashoka. Post visit continue drive for Bhopal and check in at hotel for 02 nights stay. Overnight stay

Day 11 Maheshwarr –Mandu-Maheshwar
Today morning visiting the palace and the fort. You will also visit the ghats along the river bank and the Maheswhar temples, remarkable for their carved overhanging balconies and intricately worked doorways. Later excursion to Mandu, the “city of joy”. Visit the Royal Enclave Buildings, Jahaz Mahal, Champa Bauli and Ashrafi Mahal. Overnight stay