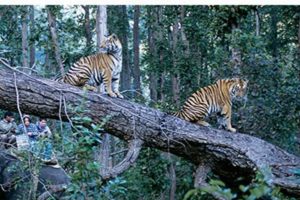 tiger-roar-tour-silde5 Day 01 Arrive Delhi
Our executive will receive you at the Delhi airport and escort you to the hotel for hassle free check in.

Day 02 Delhi Sightseeing
Your tour of Delhi will take you through the old and new face of the capital of India. Old Delhi-Old Delhi is the 300-year-old walled city built by the Mughal emperor Shah Jehan in 1648 as his capital. Drive past the Red Fort from where the Prime Minister of India addresses the nation on India’s Independence Day. Visit Jama Masjid, the most elegant mosque in India that stands high on a hillock. On our way back, we visit Raj Ghat, Mahatama Gandhi’s shrine. New Delhi- New Delhi is the early 20th century British capital designed by Sir Edward Lutyens and Herbert Baker. Drive past the President’s House, the Rashtrapati Bhavan and India Gate, the great memorial arch built to commemorate the slain heroes of World War-I and Indo-Afghan War. Visit the precursor to the Taj Mahal, Humayun’s Tomb built in 1565 AD by the widow of the second Mughal emperor Haji Begum. Later drive to Delhi’s most recognized symbol, the 12th century Qutub Minar, standing 72 metres high and Delhi’s first mosque Quwat-ul-Islam (Light of Islam) Mosque. We end the day by visiting the Hindu heritage of the city, Lakshmi Narayan temple built by one of India’s premier industrial families, the Birlas. Overnight stay

Day 03 Delhi/ Jabalpur (by flight)-Kanha ( & 04 Hrs drive)
oday morning board the flight to Jabalpur. On arrival met to our executive and drive for Kanha for 03 nights stay Overnight stay

Day 04 & 05 Kanha National Park
Kanha National Park was the inspiration behind Rudyard Kipling's unforgettable classic Jungle Book. One of best place in the world to see the critically endangered Tiger. Kanha national park provides excellent opportunities for observing the magnificent tiger in the wild. Wildlife Attraction: At Kanha nature preserve the majestic tiger is the keystone species. Beside Tigers, Swamp Deer is pride of the place which was once faced with extinction. Park also has Chausingha, the only four-horned antelope in the world. Flora: Kanha National Park is home to over 600 species of flowering plants. The lowland forest is a mixture of Sal (Shorea Robusta) and other mixed forest trees, interspersed with meadows.
Both days morning and afternoon Jungle safari by Jeep to see wild animals. During your safari you may get the opportunity for Elephant ride for Tiger Show (subject to tiger sighting). Overnight stay

Day 06 Kanha –Bandhavgarh ( 5 Hrs drive)
Morning last Jungle safari in Kanha before heading to Bandhavgarh National Park Later leave for Bandhavgarh enroute visit Fossil Park. It is known for plant fossils that were collected from near-by areas and displayed here for general visitors. Most of the fossils are about 6.5 million years old. These fossils are of trees like mango, palm, amla (emblica officinalis), banana etc. Here some fossils are of those trees which are commonly found in sea shores or in aquatic environment which means they are evident of some major volcanic activity happened in very past. Here we stay for 03 nights. Overnight stay

Day 07 & 08 Bandhavgarh National Park
Bandhavgarh national park has a large biodiversity. Bandhavgarh has the highest density of Bengal tigers known in the world. The park also has a large breeding population of Leopards, and various species of deer. Wildlife Attraction: Bandhavgarh Tiger reserve is mainly known for its Tigers. It has typical central India fauna with more than 22 species of mammals. Common Langur and Rhesus Macaque represent the major wildlife. Flora: About half the Bandhavgarh Park is covered with fine trees of Sal (Shorea Robusta), while mixed forests like Bamboo and grassland are found in the higher reaches of the hill.
Both days morning and afternoon Jungle safari by Jeep to see wild animals. During your safari you may get the opportunity for Elephant ride for Tiger Show (subject to tiger sighting). Overnight stay

Day 10 Arrive Agra
Today morning arrive Agra railway station, on arrival met to our executive and transfer to hotel. Agra is synonymous with Taj Mahal, world’s most famous romantic architecture, which situated on the banks of the Yamuna River.Later visit Agra Fort- The red sandstone fort as seen today was constructed by Emperor Akbar in 1573 and additions to the building continued till the time of his grandson Shahjahan. Agra Fort won the Aga Khan Award for Architecture in 2004 and is a UNESCO World Heritage Site . Evening visit Taj at Sunset affords the most impressive views of the Taj and as the sun goes down the white marble first takes on a rich golden sheen, which slowly gives way to rose-pink hues, then deep red and finally blue with the changing light. It is indeed a mesmerizing experience. Overnight stay

Day 12 & 13 Sawai Madhopur (Ranthambore)
Ranthambore National Park is one of the largest national parks in northern India known for its Tigers. It is one of the best places to see these majestic predators in their natural habitat. The park has a rich diversity of fauna and flora and home to wide variety of trees, plants, birds and reptiles. The major attractions of the park are: Wildlife Attraction: Besides Tigers, the park has thriving population of Spotted Deer, Blue Bulls, Blackbuck and Gazelles. Other mammals include wild Boar, sloth Bear, Mongoose, Indian Hare and Porcupines. Flora: The Park offers varied topography from secure forests to open scrublands. There are around 300 species of trees and plants with Dhok (Butea Monospermous) being the most prominent tree.
Morning and afternoon Jungle safari by Jeep to see wild animals. Overnight stay

Day 14 Sawai Madhopur (Ranthambore)-Delhi ( by train 05 Hrs)
After visiting three important National Parks today morning we board the day train for Delhi On arrival met and transfer to hotel Rest of the day at leisure to explore Delhi on your own. Overnight stay

You can start tour from Delhi; the state is well connected to the other itineraries. From Delhi, straight visit to the centre of India -Madhya Pradesh where the tourists can explore the popular wildlife sanctuaries of the state and can have the unmatched experience they had never before.

Bandhavgarh National Park is a popular tiger reserve in Central India. Madhya Pradesh is known as Tiger state of India where tiger population is highest in India. Some of the popular tiger reserves of India like Kanha, Bandhavgarh, Pench & Satpura are in this state. Bandhavgarh Tiger Reserve is spread over Vindhya ranges in Central India and Katni is 100 kms form Bandhavgarh. Vindhya & Satpura ranges nestles some of the rare species of wildlife in India. Bandhavgarh is in the eastern region of Madhya Pradesh. As it is just 250kms from Khajuraho, Kanha National Park is included in most of the tour itineraries of Central India Tours. While coming back to Delhi, visit to the Keoladeo National Park or Keoladeo Ghana National Park formerly known as the Bharatpur Bird Sanctuary in Rajasthan, which is a famous avifauna sanctuary that sees (or saw) thousands of rare and highly endangered birds such as the Siberian Crane come here during the winter season. 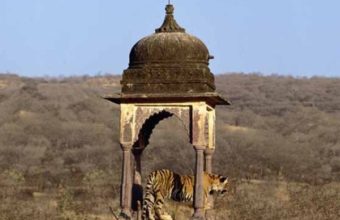 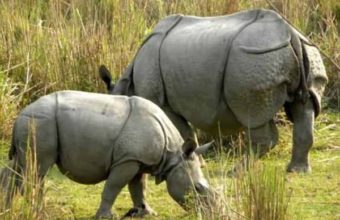